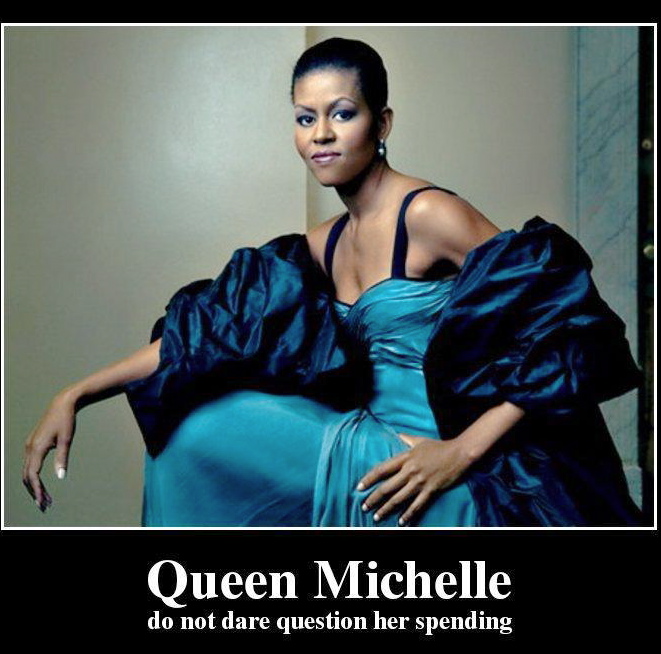 If you are a regular reader of this Website you read what I wrote about Joe Biden’s expensive hotel stay. I do not want to be accused of picking on MEN so I want to follow up with Michelle Obama’s trip to Ireland. For sure she did not have to check her bank balance or look in her pockets for some change or do any price shopping for a place to stay. Nope since it was on the taxpayers dime she went for the best. According to reports she stayed in the Princess Grace Suite which charges $3,300 a night. Her entourage booked 30 rooms.  The cost of the two day trip has been reported to be around $5 Million dollars. Taxpayers pay for first family’s travel. But shouldn’t there be a limit? The Obama’s have thumbed their noses at us lowly working Americans time after time. Even if it is legal to do it, how can the Obama family blow through millions while at the same time preaching about the cuts the sequester is causing. Obviously it does not affect them.

His trip was a real money waster too. He can,t seem to stay home. It cost Ireland a lot for his security. They take Air Force One and Air Force Two. His speeches were terrible but there was a good reason. It was the SUN. They say the sun was in his eyes and he could not see his teleprompters. Guess he has never given a speech in the sun before. When he spoke in Germany it was before 5,000 invited guests (and it has been said that a lot of those did a no show). When Kennedy spoke there it was to a crowd of 450,000. Even Republican Ronald Regan spoke to 45,000.

If anyone is against anything the Obama’s are for they can be audited by the IRS. Obama will act like he is shocked that the IRS would single out Patriots, or Tea Party groups and he will pretend to do something about it but he needs the IRS. They are the source of the money for the government to waste. Once the IRS starts on you even if you did not do a thing wrong, you’re done. They can trump up something in an audit and you can fight them for years and never win. They can take your home, you can lose your job and never really be sure what the heck happened. All you end up with is a huge attorney bill.

This got a little off track from Michelle’s trip but the Presidents lies are slowly catching up. He says this is a transparent government but it’s anything but. With all the surveillance of private citizens he is trying to say he did not have any warning about Benghazi. Help was an hour away. He hasn’t even said where he was that night, but he has lied about everything else what could he say that anyone would believe. Until the IRS is dismantled not much will change. They are not making up the rules, they are coming from the White House. The only thing positive the IRS workers have done this year is “learn to boogie”. They should boogie right off the stage and lose their jobs. If they do something really bad they get put on paid leave. I read that the IRS got a bonus of $70 million. Not sure for what. Was it for throwing the election? But hey Obama is cutting expenses by closing the White House to the public at a savings of $17,000 a week. Maybe it was that savings that made it possible for Michelle to take a hairdresser to put glitter in her bangs.  Need to go throw up yet?