A friend and I went to a concert a few weeks ago at Key Arena (she was persuasive).  The last time I visited was in High School for a hockey game and it was a good experience.  Going to the Key Arena isn’t something I would normally do these days though.  The ticket prices, parking, and traffic makes it mostly miserable for me.  The City Of Seattle strategically limits the hours of street parking so you can pay the $25+ parking at the event.  The concert was mostly sold out by the time we decided to go.  The remaining tickets were in the nosebleed section and after the Ticketmaster fees they were $98 dollars each.  With that being said, this plan was starting to fall apart quickly.  I decided to check out craigslist to see if there were any opportunities available.  After a few days, I decided to pull the trigger on some Key Arena luxury suite tickets via craigslist posting for $150 each.  Doing my due diligence I learned a lot.  Having been to a suite before at Century Link Field, I know most are purchased by companies.  They are extremely expensive and paid on a yearly basis.  As a suite owner the suite tickets are just mailed to you for each event and you can give them out to your employees or others as you see fit.  With that being said, I was curious how this guy got the tickets and what company they were with.  He said that he knows an important person with the Navy (Vessel) and the Navy has the suite to give to the guys when they are in town.  The vessel was out at sea right now so they forwarded the suite tickets to him to sell.  I couldn’t help but laugh a little inside when I heard that news.  I wasn’t surprised because the wasteful spending is everywhere but who would guess they would waste the tax money on luxury suite tickets.  Just another example of wasteful spending and lack of itemized spending transparency.  The suite featured a great view of the concert and was fully catered.

I would just like to thank the American people (your tax money) and Navy for providing me with some great suites. 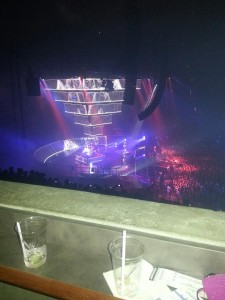 The black hole of a business, USPS, has requested to raise the rates again. Sure, it’s