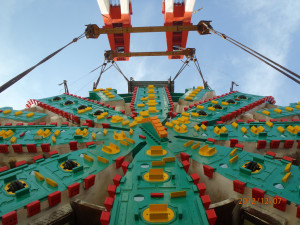 I feel the need to write a follow up on my previous story about Big Bertha. If you feel like singing and are happy with the progress you can hum this to the melody of Proud Mary

Not so Proud Bertha
Got me a job in the city,
Digging out a tunnel, ev’ry night and day
Never lost a minute sleepin’
Worryin’ about how things should have been.

My big wheel wont keep turnin’
Bertha’s gears, are burnin’
Its like rollin’, rollin” in a river.

Now for a few Headlines from the Times.
DRILL’S DEEP TROUBLES STARTED IN JAPAN. Before we ever got the machine it experienced the same leaky seals in Japan. Should have sent up red flags then and our experts should have been more concerned about whether the machine was worth the price rather than be concerned about getting it here to dig a tunnel that the taxpayers did not want.

DRILLING DOWN ON BIG BERTHA, MEGAPROJECTS-AND MUCH MORE. Once the problems started the blame game started. Big Bertha was in trouble from the start. So the communication between Lynn Peterson, Transportation Chief and Cris Dixon, Tunnel Project manager sort of broke down.

VIADUCT CRACKS SIGNAL STATE RACE AGAINST TIME. Of course they say it has absolutely nothing to do with the digging of the tunnel. Yeah right

SAGGING SECTION OF VIADUCT POSES NO DANGER, STATE SAYS. Why would this be put in a paper as headline news? If cracks and sagging poses no danger. What in the h—– are we tearing it down for and spending billions on a tunnel?

BERTHA WOES FRUSTRATE STATE. That’s no surprise when the machine stopped digging completely it could get a little frustrating.

MUCH POKING BUT NO CLUES ON WHAT’S BLOCKING BERTHA. Trying to see why Big Bertha quit digging, they discovered she was flooded. Geez Why didn’t they think of that? 110 feet below sea level. Who would have thunk.

BERTHA’S NEMESIS: 119 FEET OF STEEL WELL PIPE. State had put that well pipe in and forgot about it. Well we all lose our keys and things so maybe that’s how it happened.

BAILING BERTHA: WATER RUSHED IN. More wells needed to drain front of digger face. 90,000 gallons could be behind it. Will they have to drain the whole sound? Something is going to have to fill the space where the water is taken from.

SEPT 1 GOAL FOR RESTART OF TUNNELING. Bertha stoppage to last 9 months. But no workers are being laid off and everyone gets a good paycheck.

FORECAST SEES NO LIGHT AT END OF TUNNEL TIL 2016. Report calls for healing rift between state and contractor. They need to admit it ain’t gonna work, no way, no how.

All of the above in caps are a few of the headlines from the Seattle times. Now my own comments. The only expertise I have on the tunnel is just using COMMON SENSE THINKING. You do not need a degree in civil engineering of road building to know that digging a tunnel (I call it a giant culvert, to carry water, not cars) right along the Puget Sound with a sea wall that is about to cave is about as stupid as anything anyone could come up with. What were they trying to accomplish by building the tunnel that could not be done far faster, safer and less expensive? They could rebuild another viaduct. It is a tourist attraction. Best view in Seattle. Cars can park under it, people can walk under it, it does NOT keep people from going to the water. Another alternative would be to tear it down, make a wide street and forget about it. No flooding, no caving, no one getting buried alive. OR if you are hell bent on a tunnel and clear view of the sound, just do a cut and cover. It could be covered over level and no one would even know it was there and cars would never get trapped 110 feet down in a flooded tunnel.
We should change songs from Proud Bertha to Lets call the whole thing Off…or you Got to know when to hold em, know when to fold em, know when to walk away, know when to run. Now is the time to cut the losses. This thing has only gone a little over a thousand feet, of the 1.7 miles needed. This happened where they can dig a football field sized hole to get to it and maybe bring the blade out, but IF they get it fixed from then on it’s under buildings, they can’t level Pioneer square to dig to it again. Please stop before it’s to late. Way too much dirt and water being taken out for it not to have an impact on the historic buildings. Can you imagine the loss of life if they get a lot of guys repairing the machine and the whole hill shifts. Stupid and expensive to keep up this digging. Taxpayers are getting taken for a ride for sure. When it’s taxpayers money they just don’t need to worry about expenses. Just up the sales tax, up bus fares, up anything with a surcharge and we can’t do a thing. Keep your letters and phone calls to the state officials. It is in an earthquake zone and I would rather get smashed on a viaduct than buried alive in a water filled tunnel.
/LLL