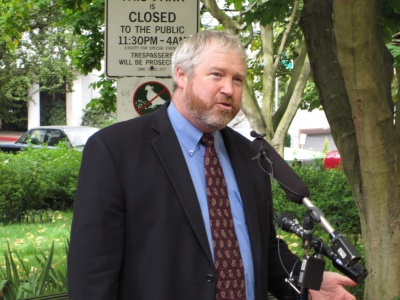 “I applaud the state Supreme Court’s decision. This opens the door to common sense returning to Olympia’s process to fully fund education and invest in our transportation system,” said Mayor McGinn.

THE ABOVE STATEMENT IS CUT AND PASTED FROM A WEEKLY E MAIL I GET FROM MAYOR McGINN.

This really surprised me (and not much the politicians do surprise me anymore). I can’t believe he would actually put in writing that the will of the voters mean absolutely nothing to him. We all know that includes almost every elected official but to admit it in writing and be proud of it. His e mail called the reader is sent to us voters who have signed up for it. lol  I hope when he runs for re-election this gets really circulated and can be filed under, “Put a fork in it, his goose is cooked”. But then if you look at what happened in November he could get voted in again. He won last time by running on the fact that he was AGAINST the tunnel, then when the votes were counted he was FOR the tunnel.

Now help me out here (comments) on what he means by common sense returning to Olympia’s process to fully fund education and invest in our transportation system.” OMG read our other articles on how the school money is frittered away and what they say it costs per student. Look at the two huge levies that were just approved by the voters (mostly paid for by the average little home owner).  How much more do they need to squander away. Most of it go to high salaries at the administrative level and not to the class rooms. You don’t need architects to design a different school in different areas. Build a standard model for all. (think discrimination here). Why should one area have a different SHAPED school house than the other. They can find a way to waste every dime they get and will never in this life time think they are fully funded. We the people cannot fully fund DREAMS (and embezzlers).

He says Olympia now can invest in our transportation system. I thought all the billions we have paid in taxes for roads and bridges was investing in our transportation system. The problem is the entire system is in worse shape than the crumbling bridges. Take a ride around the city and in the out skirts and you will find a sea of yellow cones. In Burien and Renton right in front of the Fred Meyer stores they have been there for at least two years. The Mercer mess (millions spent) is a worse mess. You cant drive through town with the way they have messed up the curbs to let rapid rides just stop and not pull in, thus stopping all traffic. In my area they tore up my street three times. Each time huge crews for months at a time. First to make my street narrower (because we had too much traffic) to discourage cars. Now we have traffic jams. Then tore it up again to make it better and repair (but nothing needed repairing) and put in wheel chair ramps on each corner. I have only seen one wheel chair on my street, but heck I have only lived in the same house 66 years so maybe I missed some. It took weeks and millions squandered. Now they are going to put a planted median down the middle of Carlton and build some sort of entertainment center on Vale and Airport way, supposedly from the “Bridging the Gap” levy voters passed God only knows how many years ago and they still have money to squander from that. Look at the tunnel. The most expensive, complicated mess they have ever dreamed up, and no money to pay for it. Look at the 520 bridge. All they have to show for the millions squandered is a lake full of leaky pontoons. The head of the transportation dept that was fired or stepped down said it would cost the public (us) over 100 million for those mistakes the transportation dept made. But assured us she did not think it would be over $200 million. WOW now that is an expert that can really pin down how much more they need to suck from us taxpayers, which the Mayor calls INVESTING IN THE TRANSPORTATION DEPT. If a private bridge building firm had messed up like that they would be paying for their own mistakes.

I don’t know how at the moment we can turn off the money supply from Olympia to the cities and counties but somehow, something has to happen. They come up with a real doozy (like the monorail expansion), spent millions on  planners, and lawyers, and even tho the voters wanted the monorail they had squandered all the money they had to build it, and had to cancel. Somebody got the money but we didn’t get a monorail. We lost our 2/3 vote in Olympia, but even they know the public is watching very carefully and if they raise the taxes too much it will be like turning in their resignation, unless somehow we lose our chance to vote on who we want to represent us. I hope that Mayor McGinn has a good going away party come election time, but with all the money he spent painting a picture of a bike on all the streets, I guess he thinks he was a huge success. If he could just get appointed to something in Washington DC and get Obama on a bicycle and get him to park his little air force one that he toodles around in, that would be a huge cut in the spending. When politicians try to explain their next big project we don’t need and cant afford they will say well the funds are already allocated, contracts have been signed, we cant stop now, and it will be paid for by grants, city funds, county funds and most of all federal funds. THOSE FUNDS ALL COME OUT OF THE SAME POCKET. Taxpayers pay for it all.