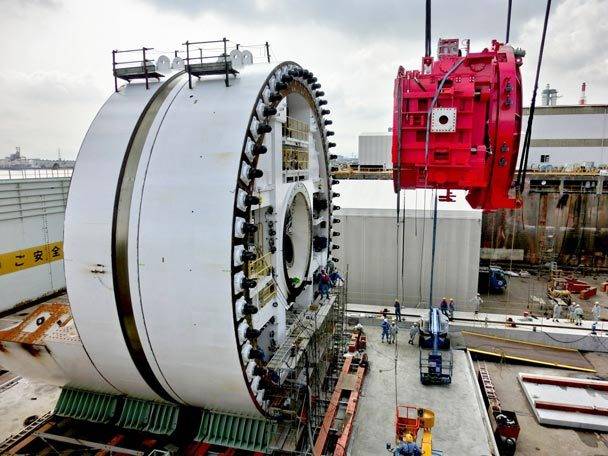 The transportation department is crying for more funds. There is not enough funds in the World to keep them going. They have great plans (dreams) but never any that actually works or gets a job done on time or on budget. It looks like a bunch of key stone cops running around where Big Berta should be digging. First of all to even think of digging a tunnel right along Elliot Bay, thru soil that is very unstable because it was filled in was stupid. I hate to say I TOLD YOU SO, but it’s sure true. I wrote an article when they were deciding whether to shore up the viaduct, tear it down and let traffic find its way, or make a shallow cut and cover, then of course those would not make World headlines or create publicity, and lots and lots of jobs so without the people agreeing that they wanted a tunnel, the powers to be decided to build a tunnel. McGinn ran his campaign on the promise that he would STOP the tunnel. Yeah right!!!! They started the dig July 30. This is Jan 23. 200 days later they can’t agree on how far they have even gone but give them the benefit of 1000 feet. The public has been spun a tail of mistruths from day one if we are to believe what Transportation Secretary Lynn Peterson said last week. She said that the state had serious doubts about the drills “operations and critical systems” since the first day it started back in July. Wouldn’t that have been the time to speak up? One excuse after another has been given on the progress until lately the headlines in the Times and on the news have started sending up red flags. let me List a few headlines.

Dec 21, 2013  Bailing Bertha: Water rushes in. More wells needed to drain the digger face. More wells needed. 90,000 gallons could be behind it. etc etc. Well I got news for you that any idiot (or idiots) who thought they could dig a hole 110 feet deep right beside Elliot Bay at sea level of below and not run into water problems should definitely be on disability for mental problems not running this project. Then Dec 31,2013, headline was, Much poking but no clues on what’s blocking Bertha. Workers are burrowing holes to find what obstruction Bertha has ran into. They mentioned exotic things maybe from huge glaciers, maybe a locomotive or ship was buried there when it was filled in centuries ago, but the poking found nothing. Turns out that the mystery blockage was 119 ft of steel well pipe put there in 2000 by the Highway 99 projects own research crew. Then comes the blame game. I do not believe the tunnel project’s Director was told about the 8 inch thick pipe. Big Bertha uprooted 55 feet of the pipe on Dec 3, 2013. Right now the headlines have all changed. The headline of the Times Jan 17, 2014 was: “99 tunnel project’s director irked at state casting blame”. the article says that Seattle Partners project director Chris Dickson was surprised that the state blames them for the difficulties on the highway 99 tunnel project. Well who exactly would you blame if it is not the project director of the outfit hired to dig the tunnel?

There is a big opportunity for a lot of lawyers to make a bundle here. The whole mess can get stalled as it winds through the courts. The workers will all be paid to stand around or “do other small jobs” like they say they have been doing since the digging has stopped. Now it appears to be coming to a real expensive blockage of who told who what and when or why. One thing for sure the taxpayers are going to really get the shaft on this one. It was doomed from day one. All through the stoppage and non digging we have been told Bertha is working fine. Problems are always encountered on projects like these. That all studies have been done to guarantee this project will work just fine. The have discovered that the viaduct has settled 1/2 inch since the digging. How many 1/2 inches can the dirt settle around this project as it digs (if it ever does) under the historic buildings. The way this key stone cops project is going the hole they have dug may be filled in with the beautiful buildings they are going to dig under. I suggest it’s time to state the truth. Just tell us “this ain’t gonna work, no way, no how” and start a flat surface road or a shallow cut and cover. We can all stand to get screwed over, but we are all sick of being lied to. Such as another little headline. Disturbing Seawall news. There could be a 30 million overrun on this project. City transportation staff say there may be more troubles ahead due to the projects complexity.  What is even worse than that news is the fact those facts were known before the primary in the mayoral race but kept from the public or the Seattle City Council. Former Mayor Mike McGinn says the news was not buried. lol  Taxpayers can stand bad news, they can’t stand being flat out lied to. I hope when asked for a gas tax hike or anything else the legislature demands the STP and WSDT to lay out ALL THE FACTS, all the expenses. You cannot get our trust back very easy now. Our Washington is almost as bad as the other Washington. Please don’t say, “what difference does it make”. We know the difference between a liar and a spin doctor. You can’t send Susan Rice out to lie for you, so who will you send?