The time has finally come where we get to see the Romney vs Obama debate. It will be interesting for sure to see who will be the leader.  We all know Obama is a good talker and this debate may just win him the election if done right.  There are many problems he is going to have to have a response to such as both the low jobs and economy numbers.  I suspect his answer will be the typical point the finger to Bush and blaming the Republicans for holding up his proposals on the table.  As of right now, I don’t believe Romney is a very good talker so we’ll have to see how that works for him.

History has told us many elections are won or lost during the debates.  This election comes down to giving Obama another chance or letting someone new in there to see what he can do.  It’s a matter of how many people believe the excuses President Obama gives regarding his past and like I said he is a great talker.  You see Obama on talk shows like the view for example because they know talking good is one of his greatest assets.  Then as Romney mentioned in secret, that 47% of Americans are being supported by the Government so they are of course going to support Obama until the end.  Why would they change anything and vote for Romney? No way they would. Many people were easily convinced with the hopes and changes he was preaching 4 years ago and many are still on-board with the President.  It’s sort of like it doesn’t matter what he says – just how he says it (which is amazing).  I expect to see Romney start to say and support the things Obama supports to try to pull some additional votes.  We’ve seen this already with him supporting President Obama’s immigration policy.  More than 60% of voters supported Obama last time in 2008.  He will be making more and more promising trying to convince the Obama supporters to change their minds and try a new path.

If you’re watching the Romney vs Obama debate tonight you can find it on pretty much every tv channel at 6pm PST.

Over 50 million are expected to be watching the debate tonight.

Lets get it on! 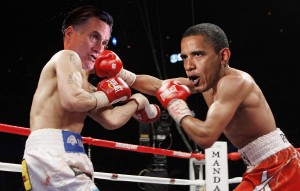