As Mitt Romney continues to rise over the competition with his recent win of both Arizona and Michigan, one has to think will it be enough?  In this election, I personally want to see more of the dramatic change to just the basic principals and way less government in my life.  The only candidate who will provide that is Mr. Ron Paul.  Unfortunately, the public isn’t ready for that yet I guess.  Perhaps another 4 or 8 years and they’ll be ready to see the light.  As I said in previous posts, the force is strong with Mitt Romney.  His branding is strong enough that it convinces people to throw votes his way.  He gets the most spotlight out of all the candidates and that combined with Super Pacs/cash I truly believe he’ll get the nomination and eventually take the White House.  Right or wrong we will see shortly.

Newt Gingrich is about done at this point finishing 4th overall yesterday.  He should be stepping down soon.  I wouldn’t be surprised if it happens shortly after March 6th after Super Tuesday (10 states voting).  He may do it sooner, however, to save himself from the embarrassment and keep his followers.  Newt may take 1 out of the 10 states and that is is home state Georgia.  Once there is a clearer picture of who is leading the pack, Newt will be quick to endorse them and get reimbursed for his failed campaign.  Ron Paul will hang on longer only to get his message out more.  I believe the public realizes (including myself) he doesn’t have much of a shot but his message is what’s important at this point.

I have been seeing more and more Obama ads on the Internet (YouTube for example).  Similar to his last election, he will make a strong push for the younger crowd and will continue to use the Internet better than anyone else.  He has done good at capturing that audience with him being a social media fan using Twitter.  I’m not confident he’ll have the same younger support this time around though.  I believe the hope and change promised (and over delivered in his speeches) wasn’t delivered as promised during his presidency.  I’m sure many would disagree with that though. 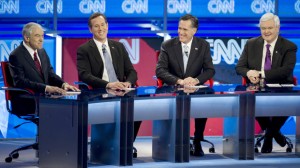