It’s official the Seattle Police Department will become more transparent.  They introduced “Tweet By Beat” and I must say it’s an amazing step in the right direction.  The program was started last week and gives the the ability to interact with the community better.  It allows the public to get a better idea of what is happening day by day.  Say there is a shooter or robber in your block – now you have a way of knowing and can lock the place up.  Right now they have 51 neighborhood twitter accounts being updated and running wild.  They even automated the process so it’s hands free for staff.

It’s to bad it took so much pressure from the public and the DOJ to make the Seattle this happen but none the less it’s an amazing step forward by the City, the Dept, and Seattle Police Chief John Diaz.

Here is a screen shot to give you an example of what it looks like:
(or sign-up if wanted) 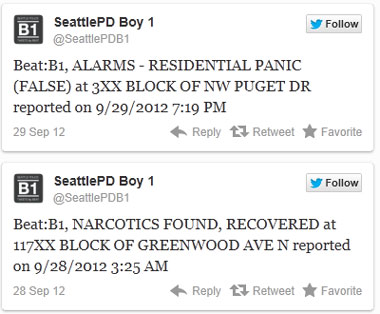 Now if we can only get more agencies across the nation to be more transparent like this. It would be a great way to keep everyone informed about tasks and program spending by line item.  Proceedural items could be discussed faster and loser programs would be notice faster so they could be eliminated before going broke.

I’m so proud of the Seattle Police Department for taking this step they did a fantastic job.

Well nightmares really do come true. Have you ever dreamed about tanks rolling down the streets

It’s been many years now for the City Of Seattle to clean up their police force.