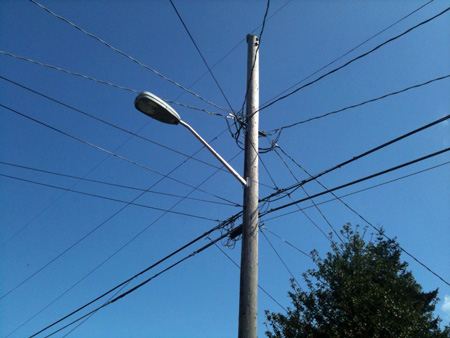 My letter to the Seattle council….

Sounds like someone got their wires crossed at City Light. Please delay your vote on the stupid stupid raise for the CEO of City Light. He was already getting a whopping 245,000. He is the highest paid city employee. What on earth can make him worth that? Now you want to give him a raise of almost $120,000. What are you thinking about, when we have no money for things the city needs you raise his pay to $364,000. That was all the information I have read or heard about and it was a shock. Completely out of line. He could fall off a light pole tomorrow and city light would go on just fine without him. Of course he doesn’t climb poles, or change bulbs or do anything we really need. He spins tales for the city and the Mayor. If he can go someplace for more pay, we city light customers will come help him pack. Remember you are representing the people of Seattle and there is no way you can think this is right or fair.

That was bad enough, but thank goodness for the Times article today (Sunday June 15) by Jim Brunner we learned there is something very wrong going on. People can stand to be screwed over, they can stand to be taxed unfairly, but one thing almost NO ONE can stand is a liar. Then top it off with a cover up. Have you taken some lessons from Susan Rice? She is the second best liar I have ever heard of. Obama is the number one. They sent her out to spin the tale of a video causing the Benghazi disaster AFTER it was well known by everyone that it was a terrorist attack. But wanted to keep it covered up so Obama could win a second term. Now she was back telling more lies that the deserter had served with dignity and distinction. She is trying to make Obama look good and facts or the truth has nothing to do with what she says. So City Lights Chief of Staff Sephir Hamilton hired a firm Brand.com to clean up the CEO’s image online. The only thing that should be online about Jorge Carrasco should be the TRUTH. Nothing taken away, nothing added. They call it a reputation-management service. The clear negatives by blanketing search results with positive content. In other words if the CEO has done some things he would like to keep covered up, just write something positive instead. If Mayor Murray is so hell bent on quality leadership he should not even be considering someone who is trying to cover their tracks.

Wait on your vote until you are sure (not just what the Mayor tells you) what it is he is trying to quash. Or is he being given a whopping raise a/k/a a pay off to promote the City’s green program. If the green program is so good it will make it by showing the people its good, not paying a CEO bribe money or pay off to promote it for you. The more lies and cover up’s the worse it will get. So don’t vote on the raise this morning.
Thank you
Lilly

Councilmember Nick Licata responds and does a very good job of explaining his point….

I too am troubled by the City Light CEO salary hike approved by the Council majority and have shared my concerns on the my Urban Politics blog and below.

To recap, the City Council voted 6-2 (Myself and Sawant opposed and Harrell was absent) last week to raise the City Light General Manager and CEO salary range by 45 percent, setting a new maximum of $364,481-per-year up from a $250,750 top-end salary. The Council vote paves the way for the Mayor to pay the highest paid Seattle city employee even more. The Mayor has said he will give General Manager and CEO Jorge Carrasco a 24 percent bump from his current salary of $244,954 up to $305,000.

Council proponents argued that Carrasco is underpaid in comparison to leaders of other publically owned utilities. Their conclusion originates from city staff analysis showing we pay our top City Light post less than other governments pay their utility heads. Past city staff studies reached the same conclusion. However, the relatability of the other salaries has been challenged because some utilities included as comparables in the staff analysis oversee multiple utility services, like water, while City Light just handles electricity. Regardless, on the surface, it would seem that one could justify the raise—albeit a very large raise on top of a very large salary when compared to what Seattle pays other city employees.

Councilmember Sawant and I raised objections of two kinds. First, and most obvious, is that in comparison to other City Light employees’ salaries, the General Manager and CEO’s new salary is out of line and sends the wrong message to our employees and the public. The big ticket salary basically says that CEOs of large corporations deserve a salary commensurate with whatever the market will bear, and that City Light must be a large corporation with its over 2,000 employees and budget of more than $1 billion. In other words, if other CEOs receive huge salaries, the City must offer the same to attract top talent.

Unfortunately, this trend has gone on for some time. In 1965, CEOs made more than 20 times what an average worker was paid. By 2012, that ratio was more than 10 times as skewed: CEOs made 273 times the average worker that year. I don’t believe that the Council, representing taxpayers, must conform to this pattern. By doing so, we contribute to the very problem of income and wealth inequality that now plagues our nation and undermines our economic stability. As workers are paid less and less, they have less to spend to keep our economy functioning smoothly. What’s more, workers are being pushed out of Seattle. Relative to wages, housing costs have become unaffordable. The irony is that since President Ronald Reagan embarked on a philosophy of letting the unfettered market determine what is fair in the 1980s, laborers have enjoyed an ever smaller share of the productivity gains their hard work produced. American workers are not being adequately compensated for their efforts.

The second objection raised is more to the point here in Seattle. Our city government has kept a tight lid on wages for average city employees. How can we fairly bargain with our employees after giving such an ostentatious salary increase to one individual? The Council and Mayor’s pay hike for the City Light General Manager and CEO justifiably creates hard feelings among our employees and sets up a very poor example for evaluating and rewarding performance.
It’s this last point that I most underscored during the meeting Monday. First, a little background—Carraso was confirmed in February 2004, and, that spring, a survey was conducted of City Light employees. It had been scheduled before Carrasco became the head of City Light. A report was issued on the findings, and four significant problems were identified:

Another survey was taken in 2007 to see if these problems had been addressed during the first three years of Carrasco’s leadership. To assure that the survey was measuring the same concerns, 29 of the 50 questions asked were pulled from the 2004 survey, either exactly or using very similar language. More than three-quarters of City Light’s workforce responded to the survey, roughly the same rate as in 2004. The Council’s Central Staff reviewed the survey and concluded that the 2007 survey averages were statistically indistinguishable from those of the 2004 survey.

A staff report to the Council concluded, “ …the most striking conclusion to be drawn from the new survey is how little things have improved in the three-plus years since the first survey was done. In key areas – leadership, communication, and staffing – in which City Light did poorly in 2004, there has been no improvement.” Though some improvements were noted, the report said scores for key areas remained “at a level the survey developer would describe as a failing grade.”

The Council acts as the board of City Light, and I believe that we (and I include myself) should have required—at a minimum—that another survey be taken. We did not. There has not been another survey conducted since 2007. I asked the Superintendent at a June 9, 2014 meeting when another employee survey would be done. He said one will be done this year. However, our Central Staff know of no such effort.

So the bottom line is: why are we boosting the pay range for the City Light CEO when we have no evidence comparable to a survey showing employees believe that there has been improvement under Carrasco’s leadership? Carrasco has told me that he solicited input from employees when drafting a new City Light strategic plan City Light. I’m glad, they certainly should be involved. But that is not the same as a thorough review; that is not a survey showing how things have gone since 2007.

Unfortunately, we heard news recently that raises concerns things may not being going so smoothly at the utility. Thanks to the investigative reporting of Seattle Times reporter Jim Brunner, it was revealed to the Council and the public that City Light entered into a $47,500 contract with marketing firm Brand.com to engage in an “action plan” that included creating positive blog items and stories about City Light’s green image.

City Light has made strides with its sustainability programs—that is not to be challenged. But isn’t it more important to spend funds to assure that we have a well-run, efficient and responsive public utility? The money would have been much better spent on addressing the problems that were identified 10 years ago, reiterated in the 2007 employee survey and, for all we know, might still exist.

Thank you for taking an interest in our city and for taking a moment to share your thoughts with me.

Everyone knows “My dog is smarter than your dog”.  This is not
When you think of the Night Market, what comes to mind? Is
Seattle, WA (January 15, 2020)– In an effort to maintain an adequate
Ricky Gervais has been selected to host the 77th Golden Globes ceremony
The article about the Tiny House Village in Georgetown asked if we would
Go to Top