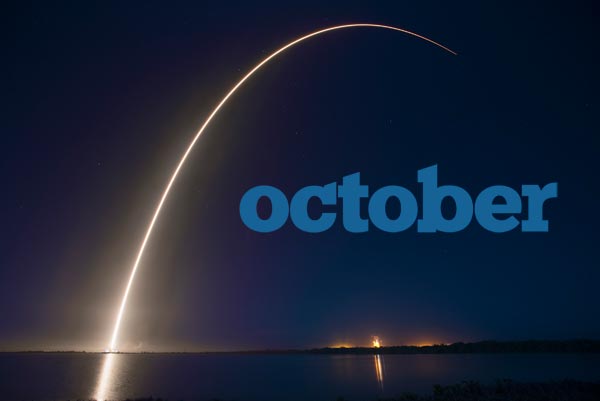 October was a busy month for Elon Musk. SpaceX had another successful launch, we are starting to see the beginnings of the Los Angeles Hyperloop, and he is busy trying to solve the Australian energy crisis. These are all ongoing projects, and many of them hit a milestone this month. Many are watching with anticipation to see what all can be accomplished before the new year. But for now, let’s take a look back at what happened over the last month.

Space X
SpaceX success is speaking for itself, and October showcased another win for SpaceX. SpaceX’s Falcon 9 rocket successfully delivered Koreasat-5A to its designated orbit. This is the company’s 16th successful mission of the year, making it twice the number of successful missions in 2016. Twelve of those landings happened in 2017 alone; the company let three other rockets splash down in the ocean this year during missions where, by design, there was not enough leftover fuel for the propulsive landing that settles the rocket down on the platform. The goal of all that work is to reduce the cost of reaching space, for both SpaceX and the companies that pay it to get there.
SpaceX is understood to be targeting mid-December for the Static Fire of Falcon Heavy followed by a late-December, No Earlier Than 29 December, the launch of the heavy-lift rocket. SpaceX fans will be tuning in from around the world to view the final rocket launch of the year. And if you have been following the number of launches, it will be a fantastic way to wrap up a monumental year for the company. For a company that almost folded in its early stages, the future is looking bright.

All eyes are on the Falcon Heavy, which Musk says will be “the most powerful operational rocket in the world by a factor of two.” Containing three boosters with nine engines each, the Falcon Heavy will have twice the thrust of the next largest rocket at lift-off — equal to about eighteen 747 aircraft — and space enthusiasts are eagerly awaiting its maiden mission. But no one is quite sure when it’ll be. Earlier this year, SpaceX mentioned November as a possibility, but November is here and the launch has reportedly been delayed due to issues linked to launchpad availability, which is partly down to SpaceX’s own busy launch manifest with its current Falcon 9 rocket. Musk is known for his fluid timelines, but this will not be a launch to miss. Read more about Elon Musk on the SpaceX biography page: http://www.spacex.com/elon-musk

Hyperloop One
The Hpyerloop is beginning to come to life. Elon Musk tweeted an image of the first tunnel his Boring Company is drilling under Los Angeles to demonstrate his progress toward integrating Tesla, Hyperloop, the Gigafactory, and SpaceX. The ultimate goal: “Transportation-as-a-Service.” Cutting down traffic and negative environmental effects from traffic in LA.

Through a system of robotic transporter sleds that will lower vehicles to underground tunnels, which will, in turn, whisk them to their destinations at 130 miles-per-hour, Musk claimed that he could cut the travel time for the eight-mile trip from downtown Los Angeles to Westwood from 40 minutes to five or six minutes. How is that for a shortened commute? You sure would get a lot of time back for yourself. Think about how much life you would gain back if you weren’t parked in the LA parking lot for your commute? The thought is appealing.
Advertisement Musk sees the coming approval of so-called “autonomous vehicles” (driverless cars) within the next four years as kicking off a highly competitive market-share grab for trillion-dollar markets among existing and new ride-hailing companies.

Hyperloop tunnels give Musk a huge competitive advantage in the coming competitive environment where urban transportation is sold by the mile. He will have the edge over legacy roads that are already highly congested and were not designed to be efficient cross-town corridors. Musk’s vision combines Tesla-made electric vehicles, utilizing Hyperloop cross-town tunnels, and electrified by Gigafactory batteries, to reach SpaceX’s launch pad.
One of billionaire Elon Musk’s lesser-known ventures is taking the spotlight with word that The Boring Company is planning to dig a rapid-transit tunnel between Baltimore and Washington, D.C. That’s not all: Musk says the company is putting the finishing touches on a second tunneling machine, which will be nicknamed Line-Storm as a tribute to a Robert Frost poem. The first machine is named Godot after the Samuel Beckett play. It’s being employed to dig a tunnel in Hawthorne, Calif., where Musk’s SpaceX rocket venture is headquartered. In June, the CEO of SpaceX and Tesla estimated that he spent only about 2 percent of his working time on The Boring Company, which focuses on lowering the cost of tunneling to facilitate high-speed underground transit. He must have saved up a lot of that time for this week.

Australia Energy Crisis
In the summer of 2017, Musk agreed to build the world’s largest lithium-ion battery to secure South Australia’s power supply in the wake of a statewide blackout. Musk was not fully prepared for the task he was undertaking, as he admitted to during a recent interview. While Musk is an optimist who works hard for the hope of some sustainable future, his hand in the solution of Australia’s energy crisis has been met with cynicism.

Tesla has multiple renewable energy projects in Australia. During an interview with Australia’s 60 Minutes, CEO Elon Musk made it clear he believes renewable energy is the future of civilization. He has never been shy or withholding about his thoughts regarding our future survival. Without it, we risk returning to “the dark ages.” Musk has a hand in the future of Australia’s energy grid. Back in June, the company signed a deal with Trans grid to supply New South Wales homes with their Power packs; in July, Tesla landed a second contract to build a 100-Megawatt battery system in South Australia, which Musk proposed to have finished within 100 days. Musk made this belief abundantly clear, saying if energy isn’t renewable, it’s not going to last.

While renewable energy is important for the benefit of our planet, Musk was speaking specifically about Australia. There’s currently a sizable fight occurring between Australia’s six states and the Commonwealth over Australia’s future energy sources, and how much energy will cost—a conflict Musk and Tesla are now caught in the middle of. Electricity has become so expensive that some people have decided to live without it to save money.
“I didn’t realize there was this big battle going on,” said Musk on 60 Minutes. “I just didn’t know.” In an attempt to belittle Tesla’s endeavors, Liberal Party of Australia member and Treasurer Scott Morrison has taken to comparing Tesla’s 100-Megawatt battery to a tourist attraction; a statement Musk is familiar with. “We get that (criticism) all the time,” said Musk. “It can be a little disheartening.” A harsh comment coming from someone who is not bringing any alternative solution.

Despite the complicated situation for Australia’s energy grid, Elon Musk thinks residents “should be proud of the fact that Australia has the world’s biggest battery.” Beyond that, he also suggested that people should be happy Australia is leading the charge in the search for better energy sources; it can be an example that shows other countries that the switch from fossil fuels to renewables is possible and in everyone’s best interest.
“It is an inspiration, and it will serve to say to the whole world that this is possible,” said Musk.
In recent months alone, we’ve seen what Tesla’s battery packs are doing in other parts of the world. Notably, in Puerto Rico, Tesla has started restoring power to local hospitals following the damage caused by Hurricane Maria.
For proof of what Tesla and renewable energy can do for Australia, look at Logan City in southeastern Australia, which managed to save $1.5 million after installing one of Tesla’s power packs. No bad. The financial benefits wouldn’t stop there, either. According to Musk, Australia has an abundance of natural resources, meaning “electricity should be cheap.”

Conclusion
With these named projects, Musk will have his hands full through the end of the year and beyond. What’s amazing about these endeavors is how they are focused on creating a sustainable and more efficient future. This month he also started striated talking about Tesla in a new and futuristic way. Imagine getting into your car, and it automatically takes you where you want to go without you even having to tell it. Though it may feel Jetson-like (as many of his newest ideas so), that futuristic reality is coming, says billionaire tech entrepreneur Elon Musk, the CEO of Tesla and SpaceX. A Twitter user suggested to Musk that he would love to be able to get in his car and tell it where to drive him. Musk’s response was, “it won’t even need to ask you most of the time.” All Tesla vehicles are built with the hardware necessary for full self-driving capability, including eight cameras and a computer that sees and hears in all directions. “Together, this system provides a view of the world that a driver alone cannot access, seeing in every direction simultaneously, and on wavelengths that go far beyond the human senses,” Tesla says on its website. Think about the time, energy, and man power you would save if this daily task was taken over for you. Musk is about maximizing efficiency and creating a more sustainable future. As much criticism as Musk receives, you have to praise him for his willingness to take risks. SpaceX, Hyperloop, and the Energy Grid’s in Australia are all revolutionary in their right. As we approach the end of 2017, many waits in anticipation for the next launch or milestone from these ventures.