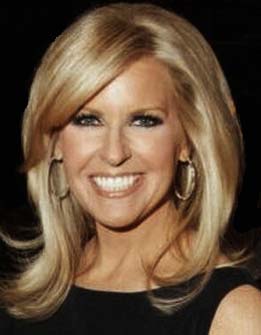 Mostly known for being a Fox News contributor and commentator on television, Monica Crowley has been a voice that extends thoughts and opinions over a variety of political topics. She was born Sept 19th 1968 in Fort Huachuca, Arizona (Army base) and is a Republican. She actually grew up in Warren Township, New Jersey, however. Her education is well respected and includes a B.A. in political science from Colgate University as well as a Ph.D. in international relations from Columbia University. Her middle name is Elizabeth and she is a Virgo.

While still a student, one of Monica Crowley’s early jobs was writing letters for President Nixon. She was 22 yrs old at the time and a great start to her career. Initially she was hired by the Nixon administration as a research assistant. She posted ted an excerpt of her book Richard Nixon and me here. Over the years she began writing more and was an editor advisor / consultant for President Nixon’s final 2 books. They have always been pretty successful by top sellers like Amazon. After Nixon died, she also published 2 books about him. She is a New York Times bestselling author which says a lot about her experience, knowledge, and popular personality. Monica Crowley has wrote for many news publications including the New York Post, Washington Times, Wall Street Journal, Los Angeles Times, Baltimore Sun, The New Yorker and much more. Previously, she was a commentator for the National Public Radio’s Morning Edition as well as her own podcast known as The Monica Crowley Show.

Monica Crowley is best known for her television career. She joined the Fox News Channel back in 1996 and never looked back. She has discussed all kinds of topics including foreign affairs and headline news. She was taken over the Fox News show, Hannity, filling in for Sean Hannity. She has worked on MSNBC’s Connected with Ron Reagan for 9 months wrapping up the shows final production which aired December 9th 2005. She continues to have guest appearances on the Fox News Channel. She’s appeared with Bill O’Reilly and Alan Colmes. She provided commentary on Election Day regarding the victory of President Trump in 2016. Soon after, Crowley joined the Trump administration as the deputy national security advisor. Monica Crowley’s sister is Jocelyn Elise Crowley. Jocelyn Crowley was married to the late Alan Colmes who passed away February 23rd 2017 from Lymphoma.
Last year in March 2017, she decided to join and take on a part-time consulting role with the Douglas Schoen firm working with Ukrainian industrialist and political figure Victor Pinchuk. This required Monica Crowley to register as a foreign agent under the Foreign Agents Registration Act of 1938.
Her boyfriend is Bill Siegel