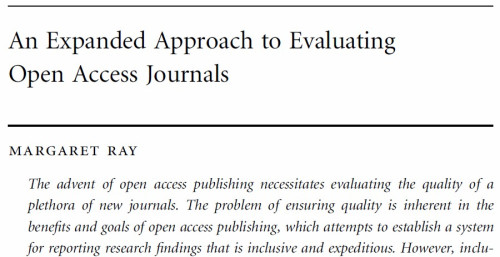 An article just published in the University of Toronto Press’s Journal of Scholarly Publishing details a test of several scholarly publishers that sent spam emails to the author. She submitted secondary school essays to determine whether they’d be accepted for publication by the journals.

The article is “An Expanded Approach to Evaluating Open Access Journals.” In the article, author Dr. Margaret Ray of the University of Mary Washington describes what happened after she sent several essays written by high-school students to journals she received spam emails from.

Preceding Dr. Ray’s methodology and results is a deep and interesting commentary on scholarly open-access publishing. A professor of economics, Dr. Ray contextualizes her experiment in the broad economic context of open-access.

Though the paper appears in a subscription journal, the publisher has kindly provided me with a link to share with those interested in accessing and reading the article: http://bit.ly/OpenAccess_Ray.

Since I can’t leave a comment on the journal site (why not? That would be useful. Perhaps I should use PubPeer), Dr. Ray cites a 10-year-old article on how easy it was to “take down” the Wikipedia by editing some nonsense into the article on elephants. The Wikipedia has ably demonstrated that an open model CAN work, as can be seen by the nonsense a) being gone and b) this article put under semi-protection so that random passers-by can’t edit it directly, but have to put new information on the talk page first. Open Access is not in and of itself evil, Jeffrey, we differ on this. But predators can make use of Open Access, so we have to come up with different controls to separate the wheat from the chaff. Peer review is broken, but that’s another discussion.

Many OA publishers have adopted with COPE and make changes on papers in case it is necessary. We must separate predatory publishers with OA publishers.

Excellent article – thanks for sharing it.

Thanks for sharing the article – Very interesting. What I note from the article and from some of the quoted sources of possible quality control is the absence of a geographical bias. I’ve noticed an increasing bias in some articles here against publishing channels based in developing countries which I find to be dangerous and often discriminatory. There are perfectly good journals in Hyderabad, there are bad ones as well. The same can be said for Amsterdam or New York City. Full disclosure – I am based in the Philippines.

That’s scary. Only one paper was rejected (for being too short). And these essays don’t even look like scientific papers.

The journal where it is published writes:
“Gold Open Access
At publication, the final version of record will become freely available on our primary platform, utpjournals.press. The Author Publication Charge is $3,000. ”

Muca, it is indeed expensive, but open access is optional in that journal. If you don’t want (or are not required by your funder), you don’t need to pay anything.

Early in February 2017, I was emailed by someone named Sylvia Rose
You’ve seen the charts with the little gold stars that outline specific
Elon Musk is one of the most ambitious entrepreneurs on the planet.
Even though the kratom plant, also known as mitragyna speciosa, has its
Here’s a quick description of the Journal of Biospectracal, a journal I
Go to Top