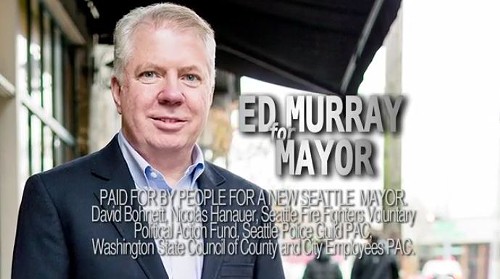 Mike McGinn is out and our new Seattle Mayor Ed Murray is in the house.  History hasn’t been good to previous Mayors in-fact the last 3 have consecutively been voted out after their re-election attempts.  Mr. Ed Murray won with approx. 56% of the vote.  His election win makes him Seattle’s 53rd Mayor and also the first openly gay Mayor.  Reviewing the election he simply had more support and being someone who is fresh/new really won him this election.  He even had the full support of Seattle’s Chamber of Commerce which is a big deal in my opinion.  Another concept he preached was “collaboration over confrontation”.  Voters can really related to that and are fed up with all the feuding in politics right now from both sides.  In just the last few days of the race there was a Washington Post article which stated several of the large telecom companies were supporting Ed Murray over McGinn which just pushed it in Mr. Murray’s favor even more.

Personally, I’m just happy to write about someone else for a while.  I’m not a big supporter for either right now honestly and I do believe that the average Joe off the street would get us all better results but that simply will not happen this day and age.

I give everyone a fair shot and if they do a great job and make positive changes I will be the first to support them fully.  I do have a few concerns one being his long history in state politics.  Some view this as positive but for me that is a obvious negative.  Our state is in horrible shape and being involved for so long (18 years as a law maker) that would mean he was part of that effort.  Having done that for so long, I have my doubts he is in the loop of what the average worker needs and feels in their daily lives.  Both Mike McGinn and Ed Murray support the $15 per hour minimum wage increase.  Just him making a stance to support it and going along with Mike McGinn makes him suspicious.  Obviously he just wanted that issue to be an even playing field (vote numbers) and it was a wise choice for him to take that stance politically.  It is a sign, however, that he is savvy and playing the game of politics.  The truth is $15 per hour minimum wage is scam to get more tax revenue out of the workers paychecks.  It’s a huge boost of revenue actually.  If you’re trying to find a job it doesn’t make sense because it only makes it more difficult for you.  It’s a scam and shouldn’t be supported.

I found that Ed Murray’s election campaign was very “play it safe” and identical to Mike McGinns thoughts about issues.

Welcome to the Emerald City Journal Mayor Ed Murray I hope my thoughts and opinions about you are not true.  I support you fully to do the right things for this city.  Don’t play the political games.  Be real, open, honest, and 100% transparent.  Make your budgets and request for funds open to public review and you’ll be very successful here.

This is our hot topics page regarding the Seattle, Washington Mayor Mike McGinn.  Below you’ll find

Yesterday 2-28-13 the will of the people of the state of Washington was wiped out. Hard