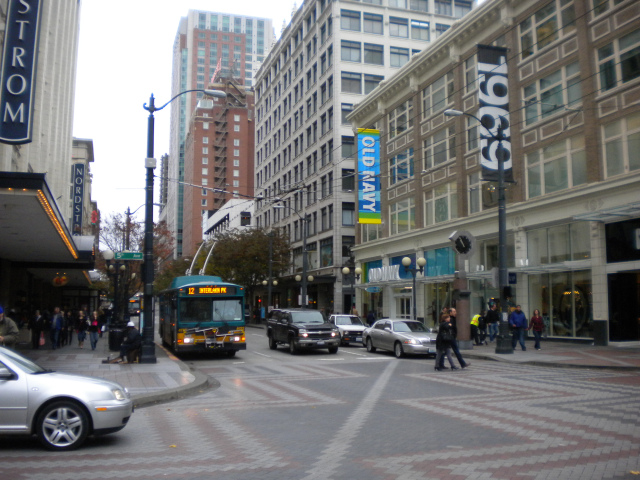 There’s a saying that good guys finish last. That’s the way it is downtown. It is not safe to walk right in the heart of downtown in the middle of the day. I am not talking about Pioneer Square or Bell town at night when just the drunks hit the streets. The main place to catch buses is at 2nd and Union or 3rd and Pike. To get there from anyplace you have to do business is downright scary. Drug sales right in the open all along Pike, you have to walk around them to pass. To get from Group Health on Capitol Hill I need to walk from the bus at 5th and Pine to 3rd and Pike. That is through Westlake Park. Drug sales, skateboards, drunks, men urinating right in plain site. What isn’t in site is a Policeman. Now I know why and can even understand that the Police have a problem enforcing what they say are civil rules, not criminal ones. Which means until these unruly drunks/thugs, ( pants on the floor druggies) murder or maim you the police can’t or wont do a thing. Police use to issue tickets for street disorder but have learned it’s useless. If they ticket you three times you have to show up in court, but of course they never do, so that ends that.

Mayor McGinn wants more money to put more police in the downtown core but the city attorney refuses to take anyone to court that the police cite. the Mayor thinks (or says) it’s because they need more housing. I beg to differ. 90% of the drug selling, skate boarders and rabble rousers are already living in free housing, get food stamps, medical and everything that a “good guy” has to work and pay for. They are bored and think they are entitled to do whatever they please with no consequences. There are some seriously mentally ill people downtown and eventually they pull out their gun and shoot a metro driver, or stab an innocent school teacher who attended a hockey game but until they do that they can’t touch them. As it stands when I go to town, transfer to my doctor all I can do is hope I MAKE IT without getting shot, stabbed or knocked down and a hip broken. That is not the way a well run city should operate. In 2007 they wrote 2,262 tickets. In 2013 they wrote 271. I believe out of those 271 they took two (2) to court. In other words downtown is totally unsafe, no amount of police can fix it if they are told to look the other way. They want people to take the bus but the transit stations are not safe at all and no one can do anything about it. There has to be a consequence if a doped up skate boarder is swinging his skate board around his head yelling profanities in Westlake Park, guys peeing on trees, this means the good guys came in last for sure.

Maybe they just need to have police available to escort us law abiding citizens to the next bus stop and let the thugs have the streets. If you readers have any good ideas please leave comments and/or get in touch with our Mayor and City Attorney. If you don’t renew your cat license, the fee jumps from $25 to $42, but if you ignore that an officer comes to your door and that costs you $125.00 plus whatever other crap they add on to the $42. It’s all about money. They will punish anyone they think they can squeeze a buck from but the lawless downtown don’t pay anything. Priorities are really screwed up. LLL (Lilly)