There is an old saying that goes something like this. “If you always do the same thing over and over you will always get the same results.” That’s exactly what the politicians are doing about gun violence. What I am going to write will be a little bit extreme but the point I want to get across is that not one thing they have suggested doing is going to make us safer or cut down crime. In my opinion it will make crime more rampant.

NOW, for my simple observations. For a fact we have GOOD GUYS with guns. We have BAD GUYS with guns. Which guys kill more people, and do more robberies? I think we will all agree here that it’s the BAD GUYS who do it. The politicians want to get in front of the camera and pretend they really are going to control guns and stop the killing. They are going to strengthen the laws. Here’s some example’s. More severe background checks, longer waiting periods to buy a gun. Make everyone who owns a gun re-register it and maybe have a background check again(not sure about this). Register a gun every time one is sold. If you want to sell your neighbor your gun you have to let the government know. WHY, and what will that do about crime? Only GOOD GUYS will do any of that stuff. You will not have one insane killer walk in with his stolen gun and register it and have you do a background check. Not one. Only Good Guys will unless they stand up and refuse and I think they should. Time has came to start to use common sense and stop grandstanding, making more laws that only will put control on honest gun owners. The only law I can think of that might be good to pass for the Good Guys is that EVERY HOME and EVERY BUSINESS must have a gun, and has to take a course in how to shoot a bad guy. A law that says if a masked man comes in the door you are supposed to shoot him because for sure you feel your life is threatened.

Now for my suggestions since NONE of your worked before and wont work now.
Any minor caught with a gun is put in jail until he is 21. No excuses, not high powered defense attorneys because there is nothing to prove or argue. If police catch a kid with a gun, and kids know that will put them in jail until they are 21 and then they can have a trial, they will think a little bit before stealing an honest mans gun and heading out to prove to their gang leader how brave they are. Wont have to worry about the “no snitch law” Just arrest him and he goes to jail, IF THEY WOULD PASS THAT LAW. Then he can have a trial after he has had many years to plan what to tell the judge. All laws protect the criminal. They say your possessions are not worth a life. I beg to argue that one. If you had a law that any business or even a private home would receive a medal or prize for every robber they shot(whether they killed him or not) a robber would think twice. It should not matter if it’s a water pistol. If I woke up and a masked guy with a fake gun was pointed in my face, and I grabbed my gun from under my pillow and shot him, I should be praised, not prosecuted because he had a fake gun. There is not one reason in the world that makes it right for any intruder or robber to break into my home or go into a store. If they knew it was OK for the owner to shoot them, they would think twice. As it is, they rob time and time again because the store owner has been told to not fight, just hand over the cash box. The robber gets a free high powered defense attorney and goes scot free and is braver the next time. If a guard saw a masked man heading in a business, or bank and shot him he should be praised. You are doing nothing but protecting criminals, and being an employment agency for defense attorneys that the tax payers pay for. Registering my gun or taking it away from me just lets criminals know that homeowners have no protection whatsoever. But the way it is now we still cant shoot the S.O.B. that’s carrying our big screen out to his car.

Chicago is a war zone because any gun law affects only honest people. You have to reverse this. Obama is grandstanding and making it sound like he is tough on crime. He is not at all. He is only tough on honest gun owners. He has the mayors and governors going along with his thinking because if they do not he will cut off their federal money supply. We have heard so much about his trips, and seen him golfing hundreds of times but not once have we ever heard of him shooting a gun, but now they come up with a picture of him with ear protectors skeet shooting. Seems funny if he is really into skeet shooting it has never came up once. Not funny ha ha. But looks like a photo op. We will never know because when a law abiding citizen questions why politicians are such liars we are told “what difference does it make”. Does he take Michelle and his daughters to the shooting range?

I hope this article helps make some changes that will cut down murders, and crime. Hope the NRA keeps up their good work, and hope honest citizens finally say, we have had enough of the politicians crap. We have to protect ourselves. The government cannot protect you with its laws to take your guns away. Taxing your ammunition will not be stopping a criminal. There is no way to stop a Sandy Hook Massacre unless you have an armed guard there while school is in session or every teacher has a gun. 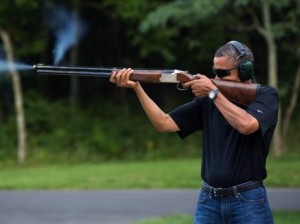