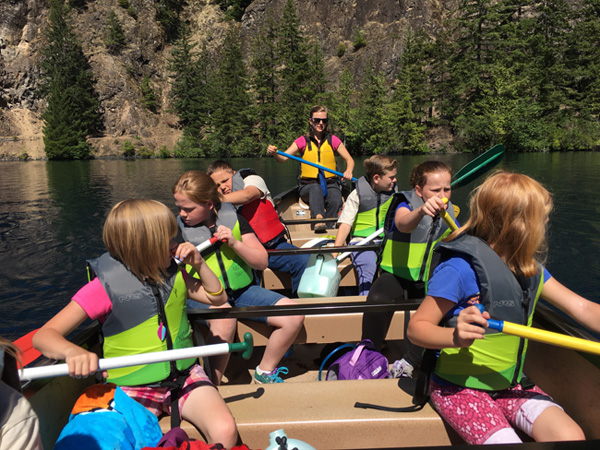 Washington’s National Park Fund (WNPF) will hold its annual Spring Dinner & Auction on April 7, 2018 at Seattle Center’s Fisher Pavilion. Titled Milestones on our Journey, the event will raise funds for Mount Rainier, North Cascades and Olympic National Parks, as well as celebrate the 50th Anniversary of North Cascades and 25th Anniversary of WNPF. Last year’s event raised a record-breaking $300,000, with $100,000 designated for restoration of historic structures in the parks. This year’s ‘Fund-A-Need’ will focus on Youth & Family projects, including:

The Mount Rainier Education Rangers chaperone student groups coming to the park, mostly during the spring when Paradise is buried in snow. A short drive for 47 school districts serving approximately 300,000 students, Mount Rainier can be seen from schools and neighborhoods, but is out of reach for many undeserved communities. Field trips allow students to directly experience Mount Rainier and use its environment as an outdoor science classroom and living laboratory. For the parks to thrive and survive into the future, we must ensure that our youth understand and appreciate the importance of places like national parks, especially as we become more urbanized, electronically connected, and fewer children spend time in nature.

Whether from a nearby town or inner-city Seattle, many of these kids have never been to the park much less spent time in a snowy environment. While it is often sunny and warm at sea level, it can be blizzarding in April on ‘the Mountain’! The kids are led out on a snowshoe walk with chaperones and learn to safely negotiate snow trails (and have some fun in the process!). In 2017, nine different school districts (Tacoma, South Thurston, Franklin Pierce, Eatonville, Mossyrock, Bremerton, Federal Way, Cloverpark, White Pass) and over 1700 kids participated in field trips to the park.

The Endangered Species Trailer at North Cascades educates visitors, students, and the public about some of the 37 species of animals believed or known to occur in Washington State that are on the Threatened and Endangered Species List. The cargo trailer is equipped with photos, and the inside has mounted mammal and bird species along with examples of furs and feathers, and replica tracks, skulls, and scat. The trailer is also taken to schools, utilized at visitor centers and campgrounds for hands-on learning, and operated at special events and festivals to engage with new and diverse audiences. A similar bear trailer was used last summer and in 4 months had nearly 10,000 visitors!

This visual draw for park visitors enables staff to discuss the challenges, concerns, and goals of species restoration, especially with regard to large mammals such as the grizzly bear and gray wolf. The real and replica pieces familiarize visitors with the animals and provide an avenue for discussion. The trailer can also be loaned and used at other National Park Service units in Washington State such as Mount Rainier and Olympic National Parks. Many people visit national parks specifically to see the animals they’ve read about or seen on television. Seeing these magnificent creatures in the wild is an amazing opportunity.

Adventures in Your Big Backyard at Olympic National Park partners with the Boys & Girls Club to introduce summer camp kids to the full diversity of ecosystems — ocean, mountains, rivers and rain forests – all contained at the park. They spend their days canoeing on Lake Crescent, swimming at Sol Duc Hot Springs, rafting the Elwha River, and hiking the Pacific Coast. The kids take away transformative experiences, and move on to become the next generation to serve as stewards of our beloved lands.

From Molly Sullivan, 2017 Northwest Youth Corps intern: “One of the most incredible parts of this summer was watching the kids’ personal transformation as they became more comfortable in the outdoors. The first few hikes were a challenge for several kids who frequently asked when it would be time to get back on the bus. These same participants were almost unrecognizable at the end of the summer. At our last outing to Ruby Beach, they were so engaged in tidepool exploration that no one wanted to leave! On our walk back to the buses, we passed several backpackers and one of the girls (who hadn’t been so sure about hiking a few weeks earlier) asked me what they were doing. When I told her they were going to camp on the beach, she turned to her younger cousin and said ‘When we’re older, we’re going to come back and do that too.’”

As our nation’s national parks face a $12 billion deferred maintenance backlog, friends’ groups like WNPF are critical in meeting the needs of our nation’s special places — beyond that of federal funding for operating expenses. A special event among many, the Spring Dinner & Auction features a plethora of rangers (in uniform, of course!), as well unique packages to bid on that are created specially by park staff for this event. A favorite from last year was a “Snorkel Survey of the Elwha River” with Olympic park scientists!