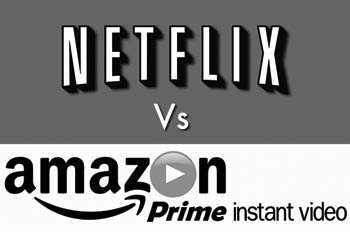 There was a time where a typical Friday night involved a trip to a Blockbuster Video or Hollywood video to try and rent the hottest new release before anyone else did. There was always limited number of new releases and there were always a very limited number of the classics. It was always frustrating to try and find the exact movie to watch. Choices were limited and overall disappointment about not having the opportunity to watch what one wanted when they wanted became the driving force in the next evolution of how we watch TV. Cable networks also only provided limited viewing options and charged high prices for the privilege.

Netflix and Amazon Video radically changed how we watch TV. Not only did these streaming services put multi-million dollar companies like Blockbuster out of business but they also changed how the average person watches TV. Streaming services like Netflix and Amazon Video provided unlimited access to large amounts of movies and television shows. They also provided access to movies and television shows from different parts of the world. Suddenly, subscribers to these services had unlimited access to new and exciting shows. Shows and movies that would have never made it to the standard cable networks or the traditional commercial broadcast networks were made viewable to a large audience.

There are certain individuals who made streaming movies and shows a reality for many households around the world. People like the founders of Netflix and Roy Price worked tirelessly to bring about the reality of streaming. It was still such a new and foreign concept that at first there was a question whether streaming videos through the Internet was a viable business model. But individuals like Roy Price, Reed Hastings and Marc Randolph were the forerunners in the streaming entertainment industry.

Netflix is one of the greatest unlikely success stories in the business world. It was founded in August of 1997 by Reed Hastings and Marc Randolph in California. Both men had already experienced success in their respective businesses and decided that they wanted to start their own business. Randolph worked as a marketing director for Hastings’ company, Pure Atria Corporation. Randolph was also a co-founder of MicroWarehouse, which was a computer mail order company. Reed Hastings, a mathematician and computer scientist, sold Pure Atria in 1997 for a very cool $700 million. At the time, it was the largest acquisition in Silicon Valley history. The two men came up with the idea for Netflix while their morning commute between their homes in Santa Cruz and the Pure Atria’s headquarters in Sunnyvale, California. They both knew that there was a better and cheaper way to have access to movies and TV shows by using the Internet.

Amazon and its business model inspired the basic idea behind Netflix. Both of the founders wanted to offer a service that would sell a large number of items over the Internet using a very similar model but they wanted to strictly ship entertainment items through the Internet. VHS tapes were still very popular at the time but both Hastings and Randolph thought that they were too expensive and too delicate to ship. DVD’s were still a fairly new concept and relatively unheard of during 1997 but both Hastings and Randolph they believed that they had the answer to their problems.

The first test run of Netflix involved mailing a DVD disk to Hastings own house in Santa Cruz. They wanted to test whether they could successfully ship a DVD without it breaking. They wanted to see if their business model of buying and selling DVDs through the Internet was viable and if they could successfully send them through the mail without getting damaged. When they had a successful test run, they decided to take the plunge. They officially launched in April of 1998 with only 30 employees and they had 925 DVD’s available through a pay per rent business model.

It took a few years for Netflix to gain true popularity but once it did, the company decided to move away from the single rental model, where someone could only rent a few DVD’s at a time and move towards a subscription service. They started to offer flat-fee unlimited rentals without having any due dates or late fees. Netflix then approached Blockbuster to offer a buyout of $50 million and Blockbuster turned it down. By 2005, Netflix was shipping 1 million DVD’s per day.

Netflix was doing really well, but the company knew that times were changing. Blockbuster was struggling and the DVD market was starting to lag. Netflix took note of the popularity of Youtube and they saw that streaming video was the wave of the future. Data speeds and bandwidth costs had become much more affordable. Netflix started to move away from the DVD rental industry and they began to focus on the video on demand market. Even though DVD sales fell sharply, Netflix continued to grow.

When Netflix started to focus on the video on demand market, their customer base also grew exponentially. By the end of 2013, they had 33.1 million subscribers in the United States. By the beginning of the fourth quarter in 2014, Netflix said they had subscribers in over 40 countries and were looking to expand to other countries in the world. All those subscribers were moving away from DVD’s and traditional cable companies because Netflix offered more options. Netflix also was working on offering new and unique content from around the world.

People were so attracted to Netflix in the beginning because it was a cheap and easy way to get a DVD but the company really grew when they decided to expand their video on demand offerings. Soon, companies like Blockbuster and Hollywood Video declared bankruptcy and the rise of Netflix paved the way for other entertainment companies to focus on the video on demand industry.

Netflix was inspired by Amazon but soon Netflix would inspire Amazon to add their own streaming service. Amazon has become the largest retailer in the world. What started as a marketplace for books has exploded into the easiest and fastest way to get almost anything. People can buy electronics, clothes, toys, food and so much more on Amazon. When Amazon saw the overwhelming popularity of Netflix they knew the next step in their evolution as a company, was to start offering streaming services.

Amazon has been selling DVD’s and VHS tapes for a long time. The giant retailer knew that the VHS market was dying out but they thought that the DVD market would have more longevity. Netflix changed this and suddenly the DVD market was dying. People in general didn’t want to buy and store DVD’s so when the option of streaming movies and television shows through the Internet became available, it was widely appealing. Amazon debuted their Amazon Video in September of 2006 to help create another avenue for streaming movies and shows.

Roy Price already had a long and successful career before he was brought on board at Amazon. He had already established himself as a power player in the Entertainment industry and Amazon knew that he was the perfect person to helm their latest project. After a successful career at Disney and as a consultant for some of the largest firms in the world, Price was eager to be working on such a new and exciting part of the next evolution in how people around the world watch television.

The first incarnation of Amazon Video was Amazon Unbox. The service grew rapidly by expanding its library and then they added the Prime Video Membership when Prime was created. In 2011, Amazon rebranded service as Amazon Instant Video and added over 5,000 movies and TV shows for Amazon Prime members. Eventually the name was shortened to just Amazon Video in 2015. Not only did they change the name but this also ushered in the largest expansion that the service has ever seen.

Not only was Amazon Video focusing on streaming new and exciting content but also they started to move towards offering live sports. This last April, Amazon was the first streaming service to acquire non-exclusive rights to live stream a portion of NFL’s Thursday Night Football. They also acquired the British television rights to the ATP World Tour and the deal is set to run through 2023. This was a huge win for Amazon because the sports watching demographic was still relying on getting their sports predominately through cable. Most sports fans still pay for cable because that is the only provider of live sporting events. But Amazon is making moves to change that and they plan on continuing to work on deals in order to stream all available sporting events.

The introduction of streaming services rapidly changed how the average person watches TV. Cable packages in 1995 cost about $22 month and now depending on your cable company, can cost upwards to $80 per month. US cable TV has experienced a steady price increase every year in spite of economic downturns. The cable price increase has outpaced inflation every single year for over the past twenty years. For anyone who has owned cable over the years, the yearly price increase was difficult for most families.

When Amazon and Netflix both started to offer their streaming services, both offered television and movies for a lot less than cable. They also began to focus on creating original content and featuring shows and movies from around the world. People were exposed to content that most cable companies would have never put into production. Large broadcast companies stuck to formulaic plotlines and characters for most of their shows. With the introduction of Netflix and Amazon, doors were opened to a wide variety of content with different themes and plotlines.

These streaming services started to move people away from basic and premier cable and from the once popular stereotypical shows to new and unique shows. Netflix and Amazon both offered streaming services for far cheaper than traditional cable companies. Both streaming services also offered a full season of the shows to be watched in complete succession. Being able to stream almost any show or movie at anytime was widely attractive to viewers.

There has been a revolt in the entertainment industry being led by consumers. Most consumers don’t want to pay exorbitant prices to watch their favorites shows and movies. Streaming services offered a way for people to watch their favorite show and movies at much cheaper prices. Both Amazon and Netflix have huge libraries filled with lots and lots of titles. Premier cable channels like HBO would only offer a run of the same 10-15 movies for months on end. Options were limited and Netflix and Amazon offered far more options. Consumers also want new and exciting content. Some of the most popular shows currently are original programing produced by either Amazon or Netflix.

It has become apparent that people were ready for something different. The popularity of Netflix and Amazon has blown up over the last 7 years and it has been predicted that these companies could put cable companies out of business. Award winning television shows and movies are being developed and produced by streaming companies and they are the most watched shows and movies on the planet. Cable companies are trying to keep up with the demand that streaming companies have created but they have not created the same magic. Streaming companies are revolutionizing the entertainment industry and there is no doubt that both Netflix and Amazon will lead the way to the next development in entertainment.

James Francis Gunn Jr. (James Gunn) was raised in Manchester, MO and
Everyone knows “My dog is smarter than your dog”.  This is not
When you think of the Night Market, what comes to mind? Is
Ricky Gervais has been selected to host the 77th Golden Globes ceremony
As far as the upcoming television season goes, there is nothing that
Go to Top