Let’s call the load of taxpayer’s money the Gravy Train.  It’s a little train that COULD. There is billions on the train. More than enough to pay good wages to fireman, policemen, teachers, nurses, and countless other essential help that a state, county or city needs.  Remember when the train loads of gold went along thru the country and Highwaymen, Robbers, all sorts of crooks would rob the train unless they were stopped by The Lone Ranger and Tonto, Hoppy and Lucky and maybe the Riflemen. We don’t have those guys anymore. It should be the governor, executives, elected representatives, mayors, helping to protect our gravy train but THEY DO NOTHING. At every stop the robbers/embezzlers/liar’s take bundles of tax payer rmoney for pet projects we never hear of. They take many trips here and there, the administrators; get paid obscene, astronomical, unwarranted salaries. Then they come back and want more taxes and the people who are elected to carry out our wishes dream up another tax and we have to load the train again.

The first to get laid off are teachers, policeman and help for the poorest of the poor. They want our sympathy. Those days are gone. Look at the waste.  They are just a few examples. They just have to have more money for roads. The Washington State Department of Transportation screwed away 377 million without one thing to show for it, studying the 520 bridge. The Seattle City Council had 700 meetings, 76 options, about the tunnel. They spent big bucks buying up land and trying to tie it up so it will have to get built, no matter what.  The Seattle Port Chief Tay Yoshitani is paid $366,825. The new Superintendent of Schools (Susan Enfield) is paid $225,000. Those are just at the top. Think how many layers and layers of administrative costs we pay for and get absolutely nothing. The Governor is paid $167,891 and should be the highest paid person in the state. The gravy train is powered by our taxes. If every property owner, (I mean everyone) refused to pay their property tax until they fired all this deadweight at the top and made  salaries comparable to teachers, police, firemen etc the train would stop. There would be so much money left over they could hire a tutor for any child that was having trouble. They could hire more police to stop crime but they for some reason hand out our money to these administrators. When someone is caught robbing/embezzling they get a golden handshake. No one has to pay a dime back to us.

They want to double the school levy. Double the property tax we pay. Our tax is based on someone who is living on Fantasy Island. I have a little 90 year old house that I paid $10,500 for years ago and the property tax on it is $3,850 a year. Because the dreamer in the Assessor’s office says an 8 unit condo should be there. So I pay tax on his dream, as well as his wages. He says they have to tax on the highest and best use.  In my neighborhood, however, the state owns 14 acres of land. They rent the back portion to a college for $3 or $4 a year. The rest is lawn. Its best and highest use according to the assessor must be for dogs and geese to poop in. It would hold a lot of condo’s.  The officials are untouchable. You cannot get a suggestion to them. They have lied to us so much they think what they say is true. They have hired so many “thugs” a/k/a staff to insulate themselves from us. If we try to contact them an aide sends us a form letter with cuts and pastes from their website. They end it by saying “if you have any questions please let them know.” Well hell – they never heard or answered the first one.

Lets shut off the fuel to this gravy train as soon as possible. King 5 investigators are doing a great job, an bloggers like the Emerald City Journal is trying to get word out on the Web. We have to stop the wasted fuel (tax money) and get rid of all of the officials (at the ballot box that are hijacking and robbing the train.  You never solve money problems by throwing more money at it. Every year they want more and more money and go deeper in debt. 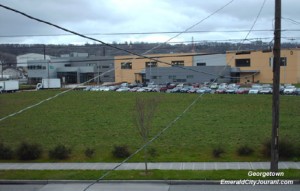