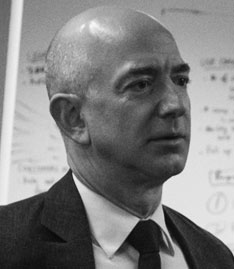 Jeff Bezos, CEO of Amazon has had an amazing career. From a young age he displayed potential to reach great heights. With a lot of hard work, being surrounded by the right people, risk, and a little bit of serendipity, the Amazon Empire has changed the way the world works.

Early Life and Career
Jeff Bezos was born on January 12, 1964, in Albuquerque, New Mexico. He was born to his mother, Jacklyn Gise Jorgensen, and his biological father, Ted Jorgensen. The Jorgensen’s were married less than a year, and when Bezos was 4 years old his mother re-married, to Cuban immigrant Mike Bezos. “The reality, as far as I’m concerned, is that my Dad is my natural father. The only time I ever think about it, genuinely, is when a doctor asks me to fill out a form,” Jeff told Wired in 1999.

As a child, Jeff Bezos showed an early interest in how things work, turning his parents’ garage into a laboratory and rigging electrical contraptions around his house, specifically to keep his siblings out of his room. He moved to Miami with his family as a teenager, where he developed a love for computers and graduated valedictorian of his high school. It was during high school that he started his first business, the Dream Institute, an educational summer camp for fourth, fifth and sixth graders.

While his career at Wall Street was extremely lucrative, Bezos chose to make a bold move into the budding world of e-commerce. He quit his job in 1994, moved to Seattle with wife and believed in the potential of the internet, therefor opening an online bookstore. Little did Bezos know that this move and start-up would eventually turn into a new way of life and change the way people obtain goods and consume entertainment. Upon reflection Bezos said: “When I’m 80, am I going to regret leaving Wall Street? No. Will I regret missing the beginning of the Internet? Yes.” We would have regretted it too.

Launching Amazon.com
Amazing began humbly in Bezos garage where, along with a few employees, he began developing software. They soon expanded operations into a two-bedroom house, equipped with three Sun Microstations, and eventually developed a test site. After inviting 300 friends to beta test the site, Bezos opened Amazon.com. Named after the meandering South American River.

The initial success of the company was swift. With no press promotion, Amazon.com sold books across the United States and in 45 foreign countries within 30 days. In two months, sales reached $20,000 a week, growing faster than Bezos and his start-up team had envisioned. Amazon.com went public in 1997.

Bezos continued to diversify Amazon’s offerings with the sale of CDs and videos in 1998, and later clothes, electronics, toys and more through major retail partnerships. While many dot.coms of the early ’90s went bust, Amazon flourished with yearly sales that jumped from $510,000 in 1995 to over $17 billion in 2011. This model continues as Bezos continues to diversify what Amazon can offer consumers.

In 2006, Amazon.com launched its video on demand service; initially known as Amazon Unbox on TiVo, it was eventually re-branded as Amazon Instant Video. In 2007, the company released the Kindle, a handheld digital book reader that allowed users to buy, download, read and store their book selections. That same year, Bezos announced his investment in Blue Origin, a Seattle-based aerospace company that develops technologies to offer space travel to paying customers.

Buying ‘The Washington Post’
Bezos made a purchase in 2013 that turned heads. On August 5, 2013, he purchased The Washington Post for $250 million. The deal marked the end of the four-generation reign over The Post Co. by the Graham family, which included Donald E. Graham, the company’s chairman and chief executive, and his niece, Post publisher Katharine Weymouth.

“The Post could have survived under the company’s ownership and been profitable for the foreseeable future,” Graham stated, in an effort to explain the transaction. “But we wanted to do more than survive. I’m not saying this guarantees success, but it gives us a much greater chance of success.”

Amazon Prime & Amazon Studios
Bezos scored another victory with the development of original content through Amazon Studios. After premiering several new programs in 2013, Amazon hit it big in 2014 with the critically acclaimed Transparent and Mozart in the Jungle. In 2015, the company produced and released Spike Lee’s Chi-Raq as its first original feature film.
Wealth

In July 2017, Bezos briefly surpassed Microsoft founder Bill Gates to become the richest person in the world, according to Bloomberg, before dropping back to No. 2. The Amazon chief then reclaimed the top spot in October, and in January 2018, Bloomberg pegged his net worth at $105.1 billion, making Bezos the richest person in history. Two months later, that figure was up to $127 billion, equal to the combined wealth of 2.3 million average Americans. Bezos is also owning hundreds of thousands of acres of land in the United States.

Healthcare Venture
On January 30, 2018, Amazon, Berkshire Hathaway and JPMorgan Chase delivered a joint press release in which they announced plans to pool their resources to form a new healthcare company for their U.S. employees. According to the release, the company will be “free from profit-making incentives and constraints” as it tries to find ways to cut costs and boost satisfaction for patients, with an initial focus on technology solutions. “The healthcare system is complex, and we enter into this challenge open-eyed about the degree of difficulty,” said Bezos. “Hard as it might be, reducing healthcare’s burden on the economy while improving outcomes for employees and their families would be worth the effort.”

Personality and Leadership
Bezos is known for his double-personality that turns him from a kind person into a rough executive inducing fear and respect in his employees. Bezos has been said to be extremely critical and there if you received an e-mail with a question mark, it is a ticking time bomb to fix whatever the problem is and report back to him. Jeff Bezos seems to have no problem running the company while still personally reading feedback from customers. “We research each of them because they tell us something about our processes. It’s an audit that is done for us by our customers. We treat them as precious sources of information,” senior Amazon vice president Jeff Wilke explains. When there is a real issue, the consequences can be harsh on the employees responsible for the issue.
Personal Life

Bezos is married to his wife MacKenzie Bezos. They meet in New York while Bezos was working at Wall Street. She has been along for the Amazon ride from the very beginning. They have four children, three sons and one daughter adopted from China.