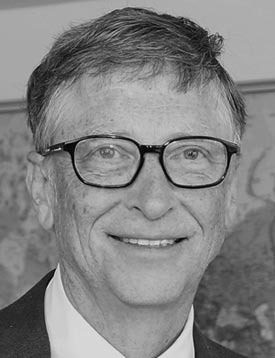 Early Life
Businessman Bill Gates life wasn’t always as lavish and eccentric as it is today. Growing up, his father was a senior lawyer and his mother an executive for a large-scale bank. While the family was fairly affluent, the Gates children were raised to work hard for what they wanted and stay humble. He was born on October 28th, 1955, grew up in Seattle, Washington with his two sister, Libby and Kristianne, and parents. Gates was known to be curious and intelligent child. He was enrolled in Lakeside School, a private prep school and excelled at many subjects including, math, science, and even drama. It was in school where Gates had his first encounter with a computer. He introduced himself to programming, making a tic-tac-toe game as his first coding success. After learning how much he enjoyed working with computers, he spent time on Computer Center Corporation’s computers to learn coding like Machine Code, Lisp, and Fortran. Bill was accepted to Harvard in 1973, intending to study computer science and mathematics. Realizing his true passion was programming, he left Harvard without completing his degree to found his own company with friend, Paul Allen.

Microsoft Corporation
Gates and business partner, Paul Allen, founded Microsoft in 1976, now the world’s largest software company. He initially made a deal with Micro Instrumentation and Telemetry Systems (MITS) to work on a new operating system for their microcomputers. Gates was a jack of all trades in the early days of his business, from working on every line of coding, to packing and shipping off orders. Microsoft’s first big break occurred in 1980, when IBM came to them for assistance to an operating system. After many setbacks and troubles between IBM representatives and Gates, they reached a final consensus to use 86-DOS as an operating system, partnering with Seattle Computer Products (SCP) as the exclusive licensing agent. Microsoft traded the system to IBM for $50,000. As the popularity of this particular type of system arose, many hardware companies began to clone IBM’s system. Even though IBM was the name on the software, everyone knew Microsoft was the reason it all happened. Media began to call Gates “the man behind the machine.” Gates became the president and board chairman of Microsoft as the company moved to Washington State in 1981. Microsoft came out with version one of Windows in 1990—a technological breakthrough, as software replaced text interfaces with graphic interfaces. Windows 95 was released in 1995, becoming the backbone for all upcoming releases of Windows. Microsoft’s Internet Explorer was the dominant web browser among computer user, usually because it came pre-installed. The area of search engines has not been an area of success for Microsoft. Their engine, MSN live search (now Bing!), was and continues to be inevitably swallowed by Google. Microsoft’s inability to make a successful search engine can never trump their successes made with their software.

Before he founded Microsoft, Gates worked for nearly two years at Traf-O-Data, a small company that made traffic counters based on an Intel 4004 processor.

The experience gave him insight into hardware manufacturing and venture capital that helped with his later success.

Bill Gates Philanthropic Pursuit
In 2000, Bill and wife, Melinda Gates, established the Bill & Melinda Gates Foundation, in Seattle, Washington. Bill slowly weaned his hours at Microsoft to focus on the foundation in 2008. The foundation is resourced through donations and grants—the Warren Buffet donation in 2006 of $1.5 billion being one of the major grants. Bill and Melinda use funding toward infectious disease control, STD control, Reproductive health care, Family planning, agricultural development, global health, global growth and opportunity, and global policy and advocacy, to name a few. Bill and Melinda’s foundation holds $38 billion in assets, making it one of the largest private foundations in the United States. Bill and Melinda’s foundation works to aid developing countries health to give them a chance to end their struggles with hunger and poverty. Their foundation engages on a global level, rather than regional—working in North America, South America, Europe, Africa, Asia, and Oceania.

Bill Gates Personal & Home Life
Bill resides in Medina, Washington with his wife Melinda (the two were married in 1994), son Rory (18), and daughter Phoebe (16). They live in their modern designed mansion overlooking Lake Washington. Their house, nicknamed Xanadu 2.0, is an earth-sheltered house—meaning it was architecturally structured to have walls against the earth to retain heat and maintain indoor air temperature. The Gates’ home is estimated to be worth $170,449,927.

UPDATE: Bill and Melinda are officially divorced. It was finalized early August 2021.

Giving Away His Fortune

The son of a successful lawyer, Gates went on to establish one of the world’s leading technology companies, Microsoft. Although he has given away billions over his lifetime, philanthropy is about more than money for Gates.

As he once said in an interview with Yahoo! CEO Marissa Mayer, my father was a very giving person—I didn’t get that from him directly because he died when I was young—but I got it from my mother…

There are many people who have achieved significant wealth who are not giving back in any significant way. That bothers me more than anything.

Since founding Microsoft in 1975, Bill Gates has helped revolutionize personal computing and fundamentally changed how people around the world use information.

In 2006, he launched The Giving Pledge with fellow billionaires Warren Buffett and Melinda French-Buffett, an initiative aimed at getting wealthy individuals to give half their fortunes away before they die.

In 2009, he announced that he would be transitioning from day-to-day operations at Microsoft so that he could devote more time to his charitable work through the Bill & Melinda Gates Foundation. The couple recently divorced in 2021.