In the next few weeks, Seattle and the surrounding areas of Western Washington will see the highest temperatures of the year. Temperatures in Puget Sound may soar into the 90s for four days in a row. Sadly most people in the affected areas do not have access to air conditioning, making the current heat wave a serious threat to their health.

Currently, the highs are in the middle 70s, so take advantage of the nice weather while we have it. The weather is expected to remain the same in the next few days. It will be mostly bright in Puget Sound on Monday morning since clouds will be confined to the inland areas and the coast. Weather forecasters predict that Seattle will reach the mid-80s in the coming days.

The Pacific Northwest will see stifling temperatures beginning on Tuesday. High pressure, a “thermal trough,” and north/northeasterly winds all combine to create searing temperatures. From Tuesday through Friday, highs might reach into the 90s, approaching record highs. This implies that sleeping conditions will be quite unpleasant, and on top of that, the danger of heat-related diseases will increase dramatically.

Be very careful with the young and the old; they are most susceptible to harm. Never leave anybody, including dogs, in a parked automobile while the sun is out. Remember that the water in local rivers, creeks, and lakes is still too cold to swim in.

Keeping Cool and Safe During a Heat Wave

The United States, Italy, Greece, and the United Kingdom are among the nations now experiencing severe heat waves. As Americans struggle with the heat, experts have shared their advice on how to stay cool and protect yourself and your loved ones without breaking the bank.

Here are a few points to keep in mind:

There are cooling centers and other buildings in Seattle where you may get out of the heat and relax while your air conditioner is running if you don’t have one at home.

Remember to drink plenty of water. Extreme heat can be potentially lethal. Residents are urged to prioritize their health and that of their loved ones.

Investors and inventors in climate technology gathered recently at the Breakthrough Energy Summit, which took place this week inside a

Seattle is indeed the admiration of a globe afflicted by a severe water shortage. Everyone in this area is aware

The rain hit Seattle on Sunday thus breaking our dry streak.  It was an impressive attempt, however, lasting 48 days

Seattle is indeed the admiration of a globe afflicted by a severe water shortage. Everyone in this area is aware of the chilly months of June through January and the fact that the official start of summer is on July 5.

However, this year is just rainy and chilly. We’ve apparently passed through spring completely. Long underwear during Little League games or a down jacket in the backyard are obvious targets for grouses. However, given the alternative, it may be appropriate to show some appreciation.

Excessive heat and a lingering drought are wreaking havoc throughout the globe, including in parts of California. Franklin County, for example, is located in southeast Washington.

There is now a severe drought that affects all inhabitants, 62,999 acres of wheat, and 34,623 livestock in the area. This has resulted in stunted crops, more wildfires, and greater difficulty feeding cattle. According to the United States Census Bureau, Franklin County has a population of 98,000.

Even in the worst-case scenario of drought, no one in King County will be affected. Actually, it’s been a great season for skiers. To put this into perspective, in King County there are only 14 acres of wheat compared to 11,000 cattle.

Heat isn’t an issue in the Seattle region, at least not just yet. We’ve already absorbed more rain than is average for the month of May, and it’s still raining. On the 13th of April, Olympia had its lowest temperature ever recorded: 28 degrees.

Others are envious of our ability to get rain. Drought conditions have gripped large swaths of California and the Southwest. Hydropower production is at risk as reservoir levels fall to unprecedented lows. People with backyards are being urged to turn off their sprinklers by water regulators. This isn’t a big deal in Seattle, where yellow lawns seem to be a staple of summer for decades.

Although summer officially begins on June 21, parts of the southern Plains and the Midwest are already seeing temperatures that are approaching record highs. Much of the Western United States is on fire. This was a year without spring for both India and Pakistan.

While May and June are often the hottest months of the year, this year saw record-breaking temperatures in March and April. Recognizing the atmospheric dangers of the rest of the globe will not make it easier around here to ruin your BBQ or damp outdoor wedding.

For the second time in as many years, we’re experiencing a La Nina year. It’s hard to say what the weather might be like following this chilly period. On June 28 of last year, the temperature reached an all-time high of 108 degrees. According to the University of Washington’s Climate Impacts Group, human activity has caused the area to continue to warm.

The heat won’t be an issue for long. Now, let’s be grateful for the cool weather and rain. It is a blessing to be working and living in Seattle at this time of the year.

In the next few weeks, Seattle and the surrounding areas of Western Washington will see the highest temperatures of the

The rain hit Seattle on Sunday thus breaking our dry streak.  It was an impressive attempt, however, lasting 48 days

The rain hit Seattle on Sunday thus breaking our dry streak.  It was an impressive attempt, however, lasting 48 days in a row.  The dry streak was the 2nd longest record in Washington.  51 days is the longest if you’re wondering and that was in 1951.  At this point we will have to go after the record next year.  The National Weather Service says the rest of the week should bring back the sunshine.  After long dry streaks and a mild case of rain it does bring out the oil on the roads so be careful out there many drivers have reported issues on the roads this morning. 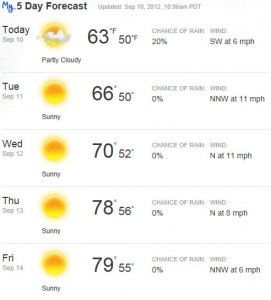 In the next few weeks, Seattle and the surrounding areas of Western Washington will see the highest temperatures of the

Seattle is indeed the admiration of a globe afflicted by a severe water shortage. Everyone in this area is aware