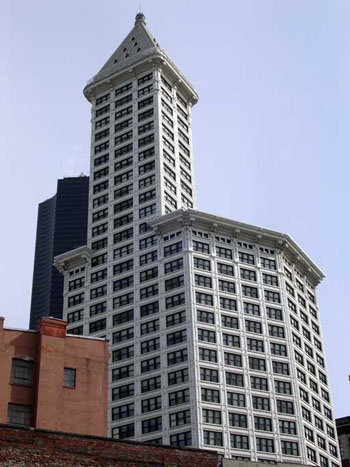 It’s one of tallest and most respected icons in Seattle – The Smith Tower. In fact it has stood in Pioneer Square for over 100 years now. The building itself is 38 stories high and was completed in 1914. The Smith Tower is the oldest in the city and until 1931 it was the tallest office building west of the Mississippi River. Many building are taller than it now. The Seattle Space Needle towered over it in 1962.

The Smith Tower is considered a Seattle landmark and was named after its creator Lyman Cornelius Smith. Initially Lyman Smith only planned on building a 14 story building but later was convinced to make a larger to beat a larger skyscraper in Tacoma known as the National Realty Building. At the time it was considered the tallest west of the Mississippi. The doors opened with a ribbon cutting on July 3rd 1914. As of today, it’s been acquired by several owners and renovated twice (1986 & 1999).

In the recent years the Smith Tower has been the focus areas for many new start-ups. The building is setup with fiber-optics and that was attracted many occupants. The building is also located very close to transportation options including the Sounder Train.

Security at the building is very tight and pass is needed to visit the varies stories in the building. In 2012, the build was struggling with covering it’s operating expenses and was old via public foreclosure to CBRE.

At the very top of building there is one residence. This is the only residence in the building and it’s occupied by Petra Franklin, husband David Lahaie, and their two daughters.

The city surrounding the building is Pioneer Square. It features lots of visitors, coffee shops, and parking lots.