Seattle’s most famous music festival is coming up at the end of this month. Sponsored by big time vendors like Corona, Fremont Brewing, Tito’s, StubHub, and many more, the 48th annual Bumbershoot festival is taking over Seattle Center beginning Friday, August 31st until Sunday, September 2nd. Festival goers from all over the country will be coming to rock out to this year’s lineup of artists including SZA, Lil Wayne, The Chainsmokers, Ludacris, Portugal. The Man, and J. Cole. Besides hosting the musical acts of the year, entertainment includes comedy acts, visual arts, dance, YOGASHOOT, theater, and B-Eats—making this event suitable to all sorts of people, not just music buffs. Venues primarily include stages in Seattle Center, but extend to Memorial Stadium and Key Arena.

Bumbershoot has also aspired to be as eco-friendly as possible while providing the festival of the year. They’ve teamed up with Seattle City Light to make this year’s Bumbershoot 100% hydroelectric and renewable. Water stations will be available for festival goers to refill their reusable water bottles in hopes to reduce plastic water bottle use. Additionally, composting and recycling stations will be available across the festival grounds.

Festival Schedule is available at: https://www.bumbershoot.com/schedule-downloadable/

Download the mobile app on Google place or the App Store for easy access during the festival.
Plan your Bumbershoot weekend as soon as possible, tickets and passes are going fast. 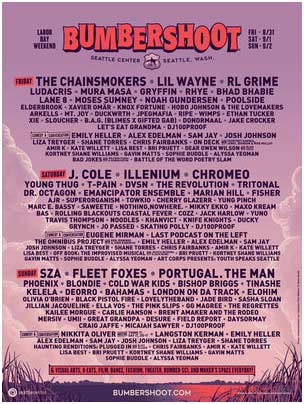