Carl Ruderman caters to the niche market of the elite. He is known throughout the world for his keen sense of luxury, his world-class publishing and commitment to worldwide tourism. Notably, his leadership is reflected in the publication, Elite Traveler, a bi-monthly magazine appealing to elite and affluent audiences around the world. (Carl Ruderman, Chairman: Universal Media, publisher of Elite Traveler)

As a leader in the tourism industry, he has been instrumental crafting true global policy advocating tourism worldwide. He is also a distinguished member of the World Travel and Tourism Council (WTTC). Through his career he as done many activities but one was went he worked closely with such world leaders as former Presidents Bush and Clinton, Prime Ministers Sharon, Netanyahu, and Rabin of Israel, President Mubarak of Egypt, President Fox and former President Zedillo of Mexico, Presidents Flosse and Temaru of French Polynesia, President Kim of Korea, Prime Minister Patterson of Jamaica, Prime Minister Guterres of Portugal, and Prime Minister Bird of Antigua and Barbuda, in addition to Ministers and dignitaries from around the globe. Mr. Ruderman’s leadership has been honored as the recipient of WTTC “World Travel Award” and he continues his leadership within World Travel and Tourism Council. His has worked with many of the World leaders to enhance tourism.

Carl Ruderman has donated his time and resources to Cancer Research and Treatments, Juvenile Diabetes Foundation, National Nephrology Foundation, Hospital for Joint Diseases and New York Hospital-Cornell Medical Center. Mr. Ruderman has also provided assistance to the Rebuild Dubrovnik Fund, Johnson & Wales University, Green Globe, Temple Emanu-El and the Turnberry Jewish Center. He is a supporter of the Windward School, a school focused on helping children with learning disabilities. Mr. Ruderman donated the Ruderman Library to the school and is a regular supporter. It was a great achievement which he continues to speak about today if asked. Supporting children with learning disabilities and providing them with the extra support they need is a great honor.

His publication, Elite Traveler Magazine, keenly follows his reputation as noted advisor to luxury travelers as well as an ambassador of tourism, worldwide. He has helped unite the leaders of Greece, Israel, and Egypt for a first ever promotion of tourism and is a strong believer in the power of education.

Elite Traveler is a bi-monthly publication from publishing and communications firm, Universal Media. The former publisher of industry leading magazines Unique Homes and Travel Agent has been publishing Elite Traveler since 2001 as noted previously above.

Utilizing its Chairman’s keen understanding of the travel industry has created the opportunity for the magazine to take advantage of the previously untapped market of luxury travel. Elite Traveler provides the Elite Affluent (top luxury customers) with the finest, most exclusive travel destinations and vacation ideas in the world. No other publication reaches out to the ultra-wealthy and provides as much valuable information. The publication is made with luxury in mind and you can tell it’s made of high quality as you read, touch, and feel it.

Elite Traveler is distributed aboard private jets and luxury yachts, in pro sports team locker rooms and first class lounges, the most opportune locations to reach high-end travelers. We’ve (Emerald City Journal) received a copy and it truly is an amazing and quality publication. I’ve personally seen nothing of this quality in a longtime.

The magazine’s content alternates between fashionable advertisements for glamorous necklaces and bracelets, luxury products, fine timepieces, automobiles and Elite Traveler’s award-winning spreads on the world’s most private travel locations. Futuristic Dubai hotels, memorable palaces in India, high culture of the French Riviera, Colorado spas, Jackson Hole ski resorts; it’s all covered in the vibrantly colored pictures and informative articles included in every issue. Rates, square feet, special features, and even celebrities who have used the destination for their temporary digs are included in each location’s description. Other publications provide only a fraction of the information readers find in Elite Traveler.

There is not doubt his accomplishments in the field of publishing for very wealthy clients is unparalleled in recent history.

The highest honor bestowed upon an individual in France is the Legion d’Honneur (Medal of Honor). The award is France’s highest decoration. The former Emperor of France, Napoleon Bonaparte, created the award in 1802 and it was first distributed in 1804.

Five classes make up the award. In order of prestigious rank:

The Legion d’Honneur is only given to esteemed individuals who have proven their worth to France. For his continuing efforts in promoting global tourism, Mr. Ruderman was honored by His Excellency, President Gaston Flosse of French Polynesia, with the French Chevalier de la Legion d’Honneur. The prestigious medal was presented to him personally by President Flosse.

This award and many more to follow was given to him for his continued efforts of promoting the benefits of tourism across the globe, working closely with governments, world leaders, Ministers of Tourism and private organizations.

The career and awards of Mr. Ruderman are very long and there is to many to mention here. His hard work has given him the opportunity to be a member of the World Travel and Tourism Council (WTTC), a former Director and Board Member of Green Globe, an environmental company in the travel industry, and has been honored by numerous governments for his significant contributions to local and global tourism to name just a few.

Carl Ruderman was named the first Distinguished Visiting Professor at Johnson &amp; Wales University.  The University is primarily based on the eastern coast and has an additional campus in Colorado.  Known as America’s Career University, Johnson &amp; Wales offers students the opportunity to pursue careers in business, hospitality, culinary arts or technology.</p>

His inclusion as a Distinguished Visiting Professor is a reflection of his commitments to the travel and hospitality industries.  Mr. Ruderman’s publications have been and currently are focused towards high-end products and premium hospitality destinations for consumers.  His company’s current flagship publication, Elite Traveler, offers the finest in travel ideas from hotels and spas to exclusive destinations and tour guides.

His experience and knowledge of the hospitality industry made him a logical choice for Johnson & Wales as a Visiting Professor.  Ruderman is a supporter of Johnson & Wales University and has a Chair named for him at the prestigious University. 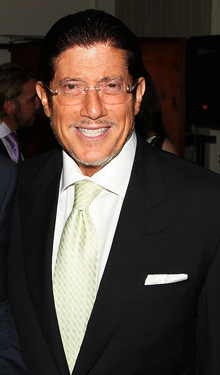 We’ve known for a long time the left is controlling much of
Washington State Department of Veterans Affairs Director and retired U.S. Army Command
Michael Spafford, an artist, painter, and art educator best known for his
Born to immigrant parents, Dr. Mehmet Cengiz Oz has seen an extraordinary
Betty White was a well-known American actress whose attitude and charisma landed
Go to Top